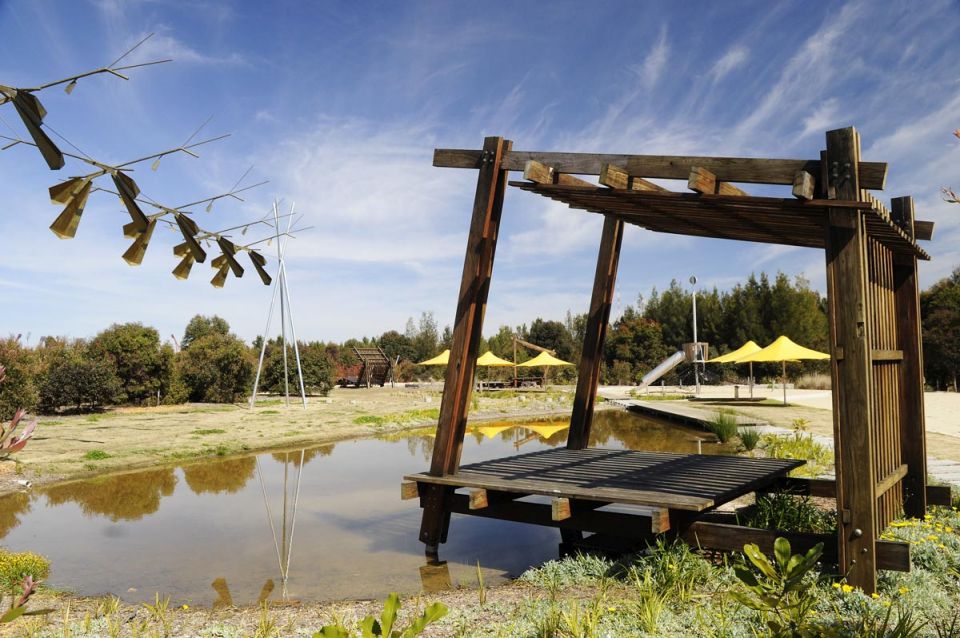 The concept behind the Wentworth Common Adventure Playground project was to provide a nature-based play experience for children of all ages. With this is mind, the design offers a variety of activities such as dip netting and bird watching, water play activities in ponds and on swales between ponds. The project included a series of off-the-shelf play elements and purpose made elements to encourage interaction with the natural aspects of the design. The ‘nest’ is a purpose made item that was constructed to encourage a range of balancing and stepping activities as part of the overall playground experience.

A series of custom made timber ‘boxes’ made from, 100% certified recycled Australian hardwoods have been provided to allow rest and observation during play. At the south end of the project, a timber bird hide has been constructed overlooking the Eastern Water Quality Control Pond. The hide provides partial concealment and seating for viewers of the pond. The design also created two additional ponds one being an ephemeral pond and one being a shallow pond serviced by water from the Sydney Olympic Parks WRAMS plant (Water Reclamation and Management System).

All timber elements used for the project are 100% Recycled Australian Hardwood hand picked and re-claimed from various sites all around Australia. The realization of the intricate conceptual design of these boxes required the input from an Engineering firm engaged by Carfax. They aided in taking the design from concept to reality without compromising the Architectural intent.

One of the largest problematic considerations for the project was that the site is located within the natural habitat of the Green and Golden Bell Frog which is a protected species. The frog is classified as endangered in NSW under the Threatened Species Conservation Act 1995 and as a vulnerable species under the Commonwealth Environment Protection and Biodiversity Conservation Act 1999. To reduce the impact of the construction on the frogs, a perimeter was established with an approved ‘frog fence’ and a team of environmentalists were utilized to clear the entire area of frogs over a period of many weeks prior to commencement. Ongoing maintenance and control of the height of the vegetation was required to ensure that the Green and Golden Bell frogs did not inhabit the perimeter or the work area. Environmental audits by Sydney Olympic Park Authority’s team were conducted over the duration of the project. 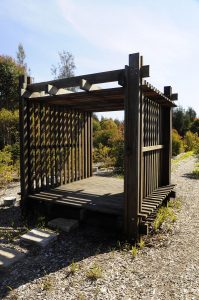 Given the proximity of the new Wentworth Common ponds to other ponds managed for Bell Frog conservation, a critical environmental management requirement was that these ponds were designed to ensure that they can remain Gambusia-free. This involved designing them to be periodically drained and dried out as necessary. The Gambusia, or mosquito fish, is a large threat to the protected Green and Golden Bell Frog. This was a constant site management concern given that the Gambusia can be transferred on the workers boots from the Eastern Water Quality Control Pond to other ponds within the frogs’ habitat, should the sequence of works not be adhered to.

Further difficulties were experienced with the use of geotechnical drilling rigs and pier boring within and adjacent the wetland areas and within metres of Sydney Olympic Parks Eastern Water Quality Control Pond. Given the close proximity to existing water courses and wetlands, a comprehensive siltation control plan was adopted in accordance with our Environmental Management System, ISO14001:2004. All excavated material was wrapped with geo-textile fabric whilst awaiting transfer to another site within the facility.

To read more about this project, please click here.